My next exhibition project will be a Great Western Railway layout set in the late 1920s to very early 1930s. My main interest in British railways is the LMS, but last year an opportunity arose to acquire a HO/OO scale model of one of Brunel’s Cornish Viaducts. The owner had built it back in the 1960s I believe, and had incorporated it into a South Australian Railways layout that I had the good fortune to operate on a regular basis back in the 1980s. This very nice layout known as the Moping Branch Railway had been disassembled for sale and the last piece that nobody wanted was the viaduct that measured 4.5 metres no less. It had been built in position in one piece so getting it home provided a challenge. After gingerly cutting it into three pieces to transport the model home I immediately thought about how I would use it. Not knowing much about the GWR I plunged into researching how I could use this viaduct to affect a suitable exhibition style layout that would make the viaduct’s builder proud of its new home. Brunel’s viaducts were a common sight in Cornwall UK, to the extent that were 51 of them built to differing styles that were classed into eight designs. Classes A1, A2, B, C, D, E, Y and Z were built and I matched the model to that of class B timber construction on masonry piers. The following layout design was drawn out to incorporate the viaduct, and a suitable main line with branch scheme utilizing the viaduct was settled. The name Porthminster was chosen for it is the name of the beach below St Ives station in Cornwall, and Penwith chosen as it is the shire in which junction station of St. Erth is situated for the St. Ives branch. St Erth is situated on the Main Line for London to Penzance.

The Branch terminus takes its cues from the St. Ives branch and the mainline station has a mix of Radley and Ledbury stations mixed together. Some baseboard construction is under way but the first items completed for the layout have been the signals. Much research on the GWR signalling style was undertaken and as a result a great variety of signals were put together using Ratio kits, providing the building blocks for the individual signals required for each position on the railway. Here are a few photos of some of the more interesting types I put together. To the left is the junction signal that will be used at the end of the main platform in Penwith for the Branch. To the right is the route signal situated on the branch near the first points as you come into the Bay roads from Porthminster at Penwith. The left doll is the Home and Distant for the next signal at the junction, for the main line or loop, centre doll for the Bay road, and right doll for the sidings. 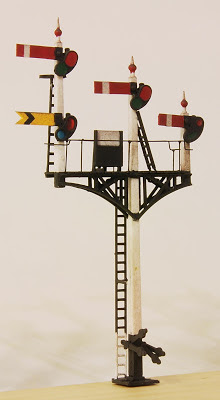 The signal below left will be situated at the end of the platform at Penwith in front of the scissors crossover you see on the plan above. The two left dolls for the loop track and the two right dolls for the main line. Because there is access to either track from either the main or the loop, there are backing signals for each track which are the small lower red and white striped arms. I intend to have passenger trains backing into the loop to drop off coaches for the Branch, so signalling needs to allow this operation. The signals below right are shunting signals for either side of the double slip in Porthminster station yard. The "S" was made from wire and glued on to the arms after painting giving them a nice fine look. In all there are at least sixteen signals required so all have been made up in readiness for their installation. 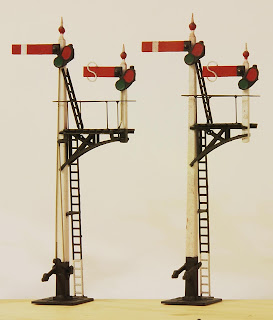 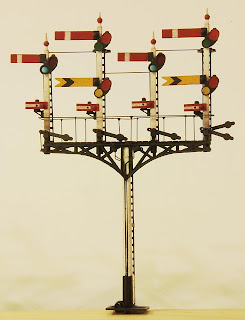 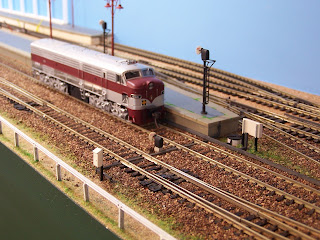 To come are progress and projects under way from my workbench. Railway subjects covered will be my interest in modelling South Australian Railways broad gauge and narrow gauge and British railway outline in the London Midland & Scottish and Great Western Railway.
Posted by Gavin Thrum at 20:59 2 comments: