Common in the construction of railway locomotive service facilities was the use of ash pits for collecting ash, but also access to brake gear and mechanical ash-pan servicing. At Port Dock there used to a "running shed" or locomotive depot that was used to store and maintain a local locomotive fleet for use around the yard and in the port area in general. Duties included local goods shunting, pilot duties for the station and goods movements up to the nearby Gillman Yard, but locomotives were often used to deliver and collect goods from Dry Creek further away. On my model, I wanted to have that capacity to receive and dispatch goods to and from Commercial Street, which in essence are trains to and from Adelaide or Mile End goods yard. Port Dock had all the connecting lines to the local area from Adelaide and was quite extensive. The running shed had ash pits just outside the front of the shed. The four road shed was a simple rectangular shape with a small workshop off to the side.

The ash pits and the floor for the 4 road running shed. Balsa-wood was used between the tracks and on the sleepers to build up the height to about 1.5mm from the top of the rails, then 1mm plasticard was layered over the top. This leaves about 0.5mm clear of the rail head so cleaning of the rails isn't made difficult. Then the joins and cracks were scribed into the surface ready for painting and weathering. Weathering powders were used to highlight the scribed lines and give that dirty concrete floor effect.
The ballast will be filled in around these floors to "bed" them in to the flat ballast and dirt filled surface required. Till next - happy modelling...!
Posted by Gavin Thrum at 17:34 No comments:

Its winter here in southern Australia (June, July & August), and a good chance for some modelling to while away those "too cold to go out" times. I decided to make another fold up layout companion for Commercial Street. The same size yet it would complement Commercial Street with trains to and from a terminus. In the port of Adelaide in South Australia, there used to be a terminus, now gone and nothing remains of the site. Now it is a police station, car park and a railway museum. My design is a very much condensed but I think quite interesting plan to run passenger and goods trains from and to Commercial Street, along with somewhere to store (and lets face it - show off ) one's locomotive fleet.
Few photos are available of the old station, originally called Port Adelaide but later in life was renamed Port Dock.
Some tweaking of the placement of the tracks was needed but essentially it laid out like the drawing and would work. The hinges which will be hidden under a lift off bridge are seen here.

Once happy that it would work, then track laying commenced with PECO code 75, the same as on Commercial Street. The track coming through the opening at the end of Commercial Street needed a slight realignment to match up so a short section of about 100mm of track needed lifting out. Having laid all the track I had completely forgotten to install the under track magnets for shunting. I use Kadee Couplers on everything so the strategic location of magnets makes shunting a real enjoyable experience. Hands free operation of shunting movements keeps things a little more real for me.


I use two button battery sized rare earth magnets as uncouplers. I drill two 10mm blind holes, place in the magnets attracting each other and lay the track directly over the top.


The 10mm drill was ground to an almost flat profile. This was done to stop the drill from grabbing the timber as it drills through. Its far more predictable than a standard profile drill bit which can grab without notice.

Next post I'll discuss the Locomotive shed floor and ash pit construction. A task that is made easier before ballasting. Till then - happy modelling!
Posted by Gavin Thrum at 02:44 No comments:

My Commercial Street layout has had a tremendous reception in recent times and many hours have been spent shunting the layout by friends and colleagues. Some less than usual trains have visited and a couple of specials were on the roster. 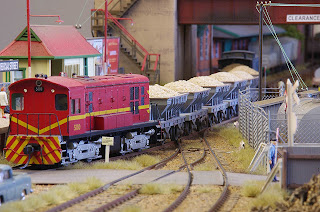 On another day, a special historical society tour special arrived...! This 500 Class model locomotive No.504 was scratchbuilt from a myriad of materials, has a brass chassis and driven via a pair of universals through the cab from the tender. The motor has two flywheels on it, and provides for nice smooth running capabilities.