A Goods Shed for Penwith yard...

A large size of Goods Shed was needed for the loading track, but what to put there? Having built a Metcalfe Models red brick goods shed before for my Wellingford LMS layout, I supposed it would be a good idea to merge two together to get the six window/bay length.  Making the necessary modifications along the way to obtain a near enough looking model proved successful. The goods sheds used for reference were those of the style at Tetbury or Broadway to name a couple.
To make the skylight windows, I scanned a diagram of Tetbury Shed in a publication, scaled it to the right size for the model and printed it out on copier paper. Window panes were then individually cut out and the paper skeleton was then PVA glued to some clear shirt box lid. After fixing the windows to the model, the individual styrene frame pieces were glued in with PVA glue to complete.

This layout keeps putting up challenges. You know that saying – if you want it done, do it yourself. Not available as kits, these tanks had to be scratch built. This was the case where the water tanks were concerned. Commonly known as Brunel style tanks, I had a go at building them with a little trickery thrown in! The models mostly consisted of styrene, with the cast iron parts of the columns dressed with copper wire.  Research showed that there were many size tanks made but all had a similar styling with regard to the cast iron work. I needed one for Penwith Junction, and being  a main line station needed to be larger rather than smaller.

The difficult area was the cast iron looped frame directly under the tank. My solution was to draw up a colour image design on my PC and print it out on matte photo paper. Trimmed and glued on with a degree of weathering, it looks convincing.

While I was on the tank thing, I made up an all steel type to present to a friend who has helped me out with reference books, videos and photocopies of relevant material that I needed for the Porthminster project. He now has a nice matching set for his GWR main line station. 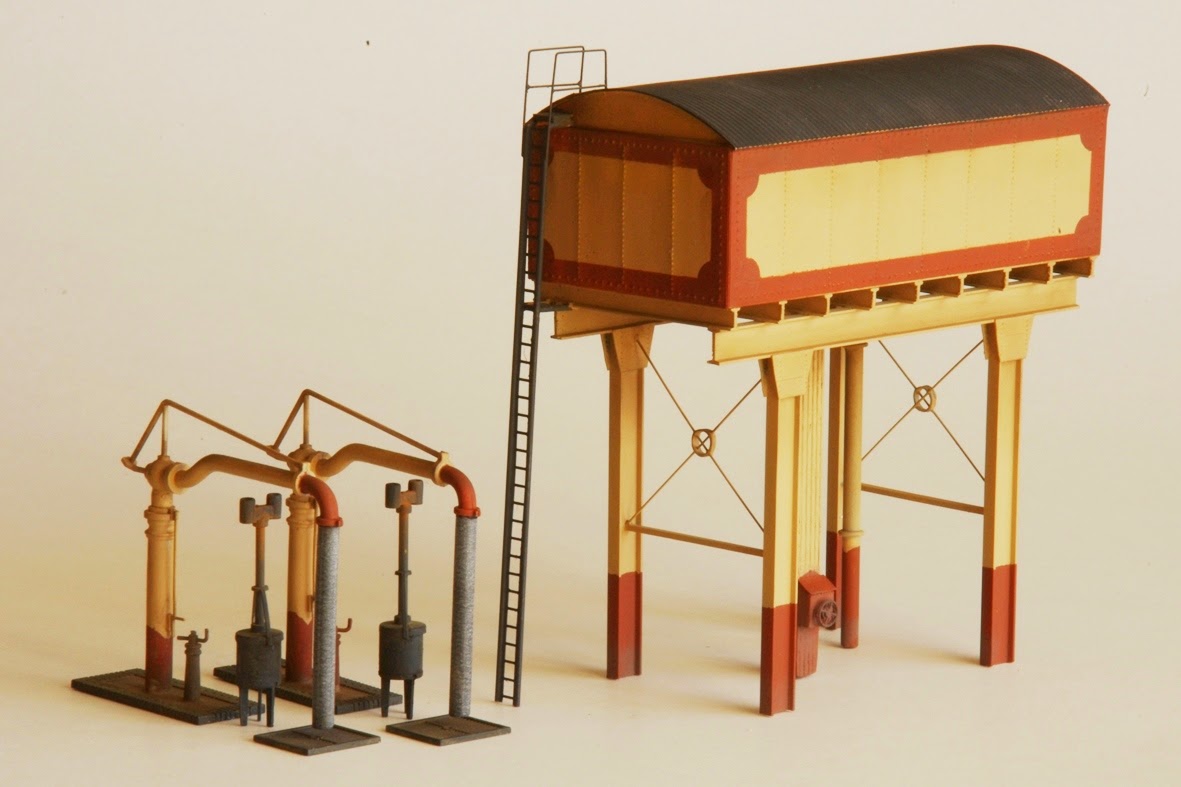 The tank was of the same style but with the all steel "I" beams. The two cranes are from the Ratio range, shortened slightly to sit on top of the passenger platforms, complete with fire devils. These combustion fires were used to help prevent water freezing the pipes when not in use between visiting engines during inclement weather.

Another item of purely Great Western style was the footbridge. I procured a kit from Scalelink, but I was somewhat confused by the instruction sheets and construction methods. I assembled it my way with a few modifications along the way. One being that it was to be wider than the kit instructed. Fortunately there was enough length in the etched brass lattice sheet supplied to account for this. 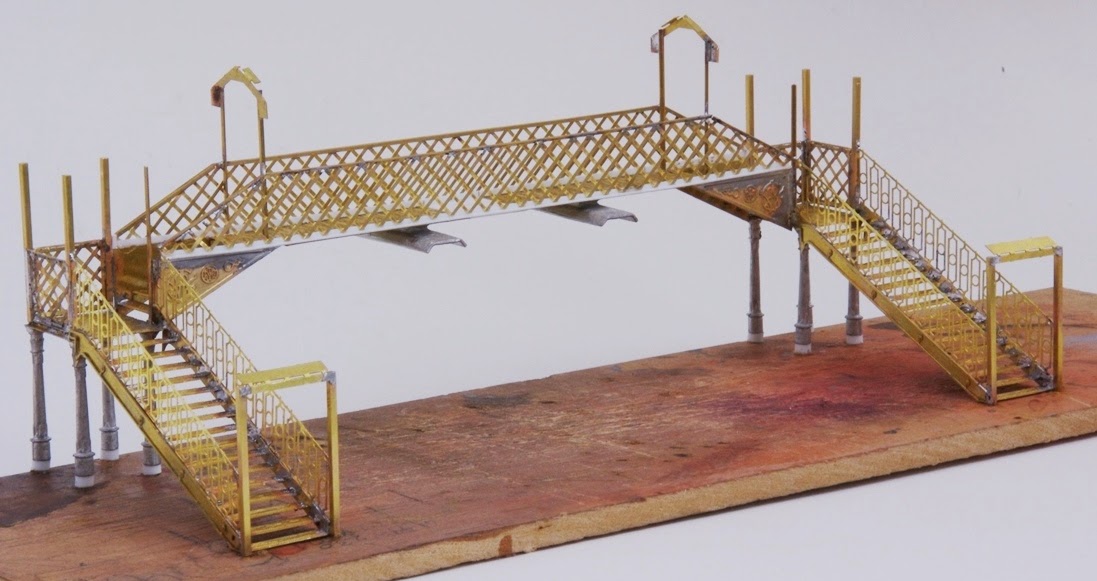 Also I added guttering and downpipes, plain ends to the canopy at the bottom of the steps and a few tweaks to the flimsy canopy frames to make them stronger. 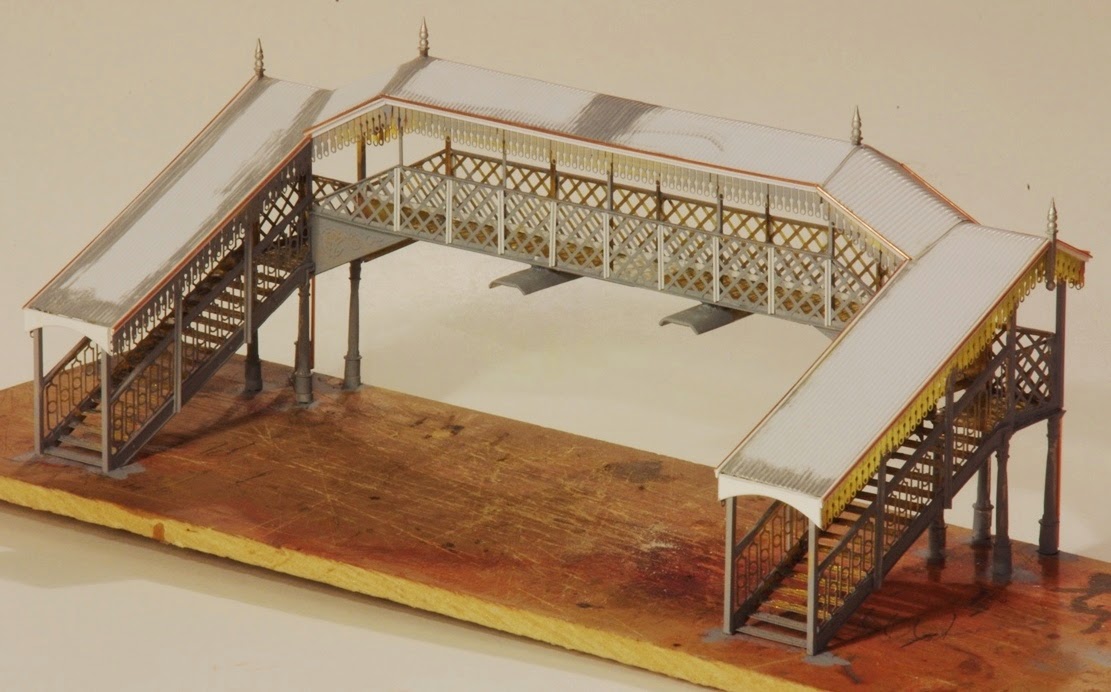 Acombination  of styrene and brass works for me. Supaglue is the answer here. whatever it takes to achieve the result.


It worked out well and sits proudly across the platforms matching in with buildings as they were at Radley Station, which the buildings were modelled from.


The layout is now starting to look more like a railway with curtains made and clipped on with press studs. A must for top presentation at Exhibitions. There is still another coat of Carriage Green to be applied around the fascia areas above the curtains.
Till next time - good modelling!!!

The tunnel entrance at Penwith Junction was the first area of the layout to get the scenic treatment! The broad cutting slopes appear so typical of Brunel’s designs and quite visually effective I think.

Continuing around this end of the layout the small road bridge was clad in Slaters plasticard stone, and decorated the same as the tunnel portal. The cutting for the branch line had some rocks crafted from foam and attached with expanding foam. The entire plastered area was painted with a mid brown acrylic paint. The grasses were then added. Most of the area had Heki wild-grass matting cut into differing shapes and teased to fit around the landscape, glued on with PVA glue.

It was always intended to have an abandoned mine in the corner. Some more internet research resulted in a number of images of the skeletons of pump houses still standing around Cornwall. It was noted that Cornish smoke stacks were rounded whereas Welsh stacks were mostly Square. I set to work on scratchbuilding the building from thick Balsawood and clad with embossed stone plasticard. The stack was made from a cardboard roll, sliced down one side with a tapered strip removed. When the gap is then closed up by slightly twisting the tube, a tapered tube results.  With the join glued and sheathed with stone embossed plasticard suitably aligned to give the desired effect.

The corners of the building were then dressed with quoining cut from paper. All gaps and edges were then wiped with modelling putty using my finger tip. Once dry the model was painted with grey primer enamel. Then a thin wash of cream enamel, a dry brushing of brown highlighted the stone work. Finally the whole building was then dusted with weathering powders to age the surfaces. On the north side of the build some green was added to represent moss. Red brick papar then covers the upper cap and rim. 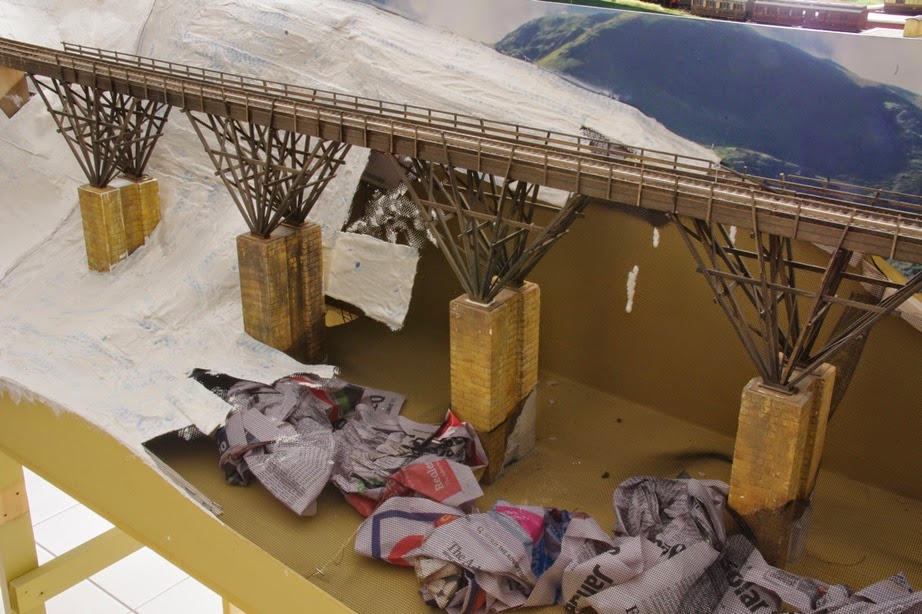 The viaduct has had some attention too. Flywire was arranged around the bottom of the piers and profiled with lumps of screwed up newspaper. This area is currently under construction. While the viaduct is the only railway object on this part of the layout, its demand on the scenery is huge, and integrating it into the scene is quite challenging to say the least!
Posted by Gavin Thrum at 20:11 No comments: