Not one to pass up a challenge, I saw the potential in making up two different types of passenger stock from a pair of old Triang Clerestory Brake Thirds. Studying the drawings and photos in well known Great Western coaching stock publications revealed the two compartment sections joined together would produce Diagram C23 10 compartment coach. Then trimming one ducket section off the remaining two brake end sections and joining them together would produce a diagram V5 Passenger Brake Van. Upon making the cuts in the right places and joining them together, both vehicles were accurate for length and looked very much like the prototype photos.

The V5 PBV roof line was ever so slightly lower than what it should be but I would be happy with that as it's not obvious. The chassis gear would need the four white metal axlebox/springs, two brass etched W iron sets and two Maunsel style axles to ride on. The long tank, vacuum cylinder, brake shoes , hangers, rodding, and side boards were scratch-built from styrene and spring steel wire. The side boards were secured using staple gun staples which are quite effective given they have a rectangle cross section. Kadee couplers were secured in place with screws and some weight added under the floor.
The vehicle would have the 1928 to 1934 livery so masking for the chocolate had to be carefully done to be faithful to the scheme. Once the brown was dry it was masked up for grimy black to the side sills and chassis including the buffers and beams.

A roof was made from 30thou styrene, bent and formed in the right places. I glued in a couple of lengths of code 100 rail upside down along the curve line inside the roof. This would aid in holding the roof to shape and not warp over time. The roof was glued on and painted, along with the last single gold line separating the cream from the chocolate. This was done with a bow pen.

The final result is convincing and I look forward to towing the V5 behind the 517 class sometime soon.
Posted by Gavin Thrum at 22:41 No comments:

I am trying to keep reasonably authentic motive power and rolling stock around the St. Ives, St. Erth, Truro to Penzance area in the late 1920s and early 1930s. Upon researching this era, I discovered there were two 517 class engines brought in as temporary replacements for the 44XX and 45XX engines when they were recalled for overhaul in this time period. That was all I needed for an excuse to have one of these interesting little engines. A Chinese made Hornby 14XX was acquired and the following is a summary of the changes I needed to accomplish a close enough model that would look right at home on the branch and catch the eye of a Great Western enthusiast.

The 14XX as it was out of the box was a reasonable runner but it had that annoying limp that so many modellers complain about. Something was going to have to be done about that later! After removing the body the cab roof was able to be prised off as it was a separate piece and the smokebox/boiler assembly could also be detached. On examining the drawings for both 14XX and the two versions of 517class, the easiest option was to convert to the Swindon rebuilt engines which keep the trailing wheel with the outside axle boxes, and most of which had the large style bunker. Also I found that a number of the 517 class had numbers in the low 1400s in my era, and as it happens 1427, which is the number of this particular Hornby model, was a Swindon shed engine. It may have well been one that was temporarily sent to Cornwall!

Using drawings and photos from an article and some internet research, a list of initial expected modifications was made.
At this stage the body parts were then superglued together and the following parts made up.
I think that covers most of the changes. Obviously the front of the bunker needs be built up suitably incorporating the back cab plate. Also I built a small backhead to the boiler in the cab that reaches down to the top of the motor. On this I added some valves, a sight glass, a couple of pipes and a regulator. I even put two pressure gauges on the front cab plate but these can’t be seen very well once you put in your engine crew, so it’s not really necessary. The smokebox door has the latch handles moulded straight back to the face of the door which looks ugly. So some careful carving with a sharp pointed knife cut away the web behind the handle that is on an angle vastly  improving the appearance. The study of photos for the finer points of detail will show there were quite a few minor differences among the class. So if you pick a particular style, either the Wolverhampton or Swindon rebuilds or if you go back to an earlier era, be aware of the differences.

The buffers and beam faces were masked off, as was the safety valve cover and the two number plates on the side tanks. A grey primer was applied over all, but a little extra was applied to the re-joined areas to ensure they are not seen through the following green coat. It was let dry for a day then the green was sprayed to the required areas. Removal of the masking tape left only areas of black left to pick out with a brush.

Some HMRS transfers for the GREAT WESTERN were applied to the tanks (no need to bother with the buffer beam numbers as they were untouched) and the whole body given a coat of clear to seal up.
It was time to dress up this little tank; 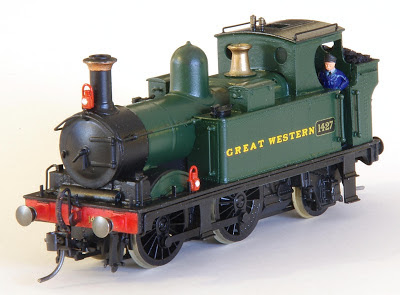 IMPROVING THE CHASSIS
The chassis was always going to be cause for concern. I was looking at keeping the chassis as it was but many attempts at fixing that limp ended in defeat. So the Hornby driving wheels were removed (one wheel was out of round and another had the wobbles) and replaced with some Romford wheels that I had lying in a project box from the 1980s.  I machine the flanges down to a RP25 profile (as they had the older flange size) and installed using the Hornby connecting rods and crank pins. The limp was still there so I then had to open out of the journals slightly and pack them with a thin sleeve of brass to remove the axle slop. That did the trick; it then ran quite smoothly which left only the trailing wheel to deal with. The large looking flanges stuck out like a sore thumb, so I machined the flanges down to match the drivers. There is a riveted balance weight on the rear driving wheel, so I used some 3Thou styrene with the rivets produced by poking a sharp compass point through from the other side.
Shortening the body meant also shortening the chassis to fit, so each end had some cut off so the chassis sat neatly inside the buffer beams each end.

The Hornby chassis has a plastic keeper assembly which incorporates the pick-ups, but these were not affected.  A consequence of trimming off the chassis meant there was a gap created between the die-cast chassis and the plastic keeper.  This gap just so happens to be the right amount for the NEM Kadee shank to be slotted in, and a small screw threaded in place to hold them. I use Kadees for all my models. The body only appears to need the funnel fixing screw to hold the body to the chassis firmly. All the wheels, chassis ends and copper wire down the side of the firebox were brush painted black. There was a little overspray at the base of the safety valve cover so that was cleaned off and some copper paint was applied to the lower half of the funnel coppertop.

All that was left now was weathering and glazing the spectacle plates.

This little model took more time to modify than I thought but I think it was worth it, bless its little soul!
Posted by Gavin Thrum at 10:57 No comments: